All countries have been hit hard financially by the outbreak of corona. But different industries have been impacted very differently, however. In Norway and Sweden, new numbers have recently been published that show the effect on the printing industry.

In an in-depth analysis, Media Monitor (another Grafkom news letter) has looked closer at the turn over in the Norwegian printing industry in the period March – July. All numbers in this article are based on reported turn over to the state and show a decline of 30 to 71 per cent compared to 2019. (See table below).

It is also worth noting that the loss in turn over is lower in the printing industry than the loss for all companies (“Alle”) that have applied for the  Norwegian Government’s compensation scheme.  This does not mean that printing companies have been doing better than the average Norwegian company but better than the average company that has applied for the compensation scheme. 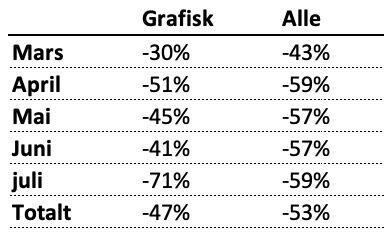 The Swedish Printing Association (Grafiska Företagen) has published industry numbers for Q2 2020 which show a decrease of 33,4 per cent overall compared to Q2 2019. Large format printing sees the worst decline with – 48,1 per cent. These numbers are based on commercial printers that are members of Grafiska.

In a separate analysis, the Swedish suppliers’ association (Grafiska Leverantörerna, GL) has published offset plate statistics for Sweden. Q2 2020 vs Q2 2019 shows a decrease of 24,9 per cent in sold offset plates.

Moreover GL presents numbers showing that turn over from service is relatively stable while new investments in software and hardware are severely down from last year.

Below you can listen to Ravindra Parasnis, CEO of Grafiska Företagen, comment on the development in Sweden.